ARTICLES ON THE BOOK 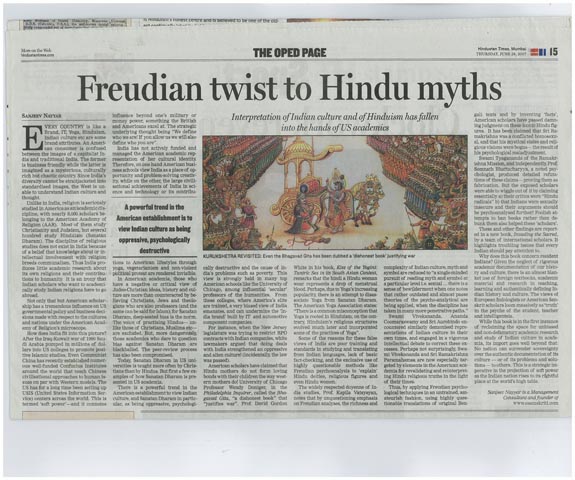 Interpretation of Indian culture and of Hinduism has fallen into the hands of US academics.

Every country is like a Brand! I.T., Yoga, Hinduism, Indian culture etc are some brand attributes. An American consumer is confused between the image of a Capitalistic and Traditional India. The former is business friendly while the latter has an image of mysterious, culturally rich but chaotic country. Since India’s diversity cannot be straight jacketed into standardized images, the West is unable to understand Indian culture and thought.

Unlike in India, Religion is seriously studied in America as an academic discipline, with nearly 8,000 scholars belonging to the American Academy of Religion (AAR). Most of them study Christianity and Judaism, but several hundred study Hinduism (Sanatan Dharam). The discipline of religious studies does not exist in India due to a belief that knowledge about or intellectual involvement with religion breeds communalism. Thus India produces little academic research about its own religions and their contributions to humanity. Indian scholars who want to academically study Indian religions have to go abroad.

Not only that but American scholarship has a tremendous influence on US governmental policy and business decisions made with respect to the cultures and nations under the American academy’s microscope.

How does India figure in this picture? After the Iraq Kuwait war of 1990 Saudi Arabia pumped in millions of dollars into US colleges to promote positive Islamic studies. Even Communist China has recently established numerous well-funded Confucius Institutes around the world that teach Chinese civilizational approaches to human issues on par with Western models. The US for a long time set up USIS centers across the world. This is called ‘soft power’—and it connotes influence beyond one’s military or money power something the British and Americans excel at. The strategic underlying thought is, ‘We define who we are! If you allow us we will also define who you are’.

India has not actively funded and managed the American academic representation of her cultural identity. Therefore, on one hand American Business Schools view India as a place of opportunity and problem-solving creativity, on the other, the large civilizational achievements of India in science and technology or its contributions to American lifestyles through yoga, vegetarianism, non-violent political protest are made invisible.

In American academia, those who have a negative or critical view of Judeo-Christian ideas, history and culture are more than counteracted by believing Christians, Jews and theologians who are also professors (and the same can be said for Islam); for Sanatan Dharam, a deep-seated bias is the norm. The voice of practicing Hindus- unlike those of Christians, Muslims etc -are excluded, but more dangerously those academics who dare to question bias against Sanatan Dharam are blackballed. The peer-review process has also been compromised.

Today, Sanatan Dharam in U.S. universities is taught more by Christians, than Hindus themselves. But first a few examples of how Sanatan Dharam is presented in U.S. academia.

There is a very powerful trend in the American establishment that views Indian culture and Sanatan Dharam in particular, as being oppressive, psychologically destructive and the cause of India’s problems like poverty. This view is very strongly held in many top American schools like the University of Chicago, among influential “secular” professors of the humanities. From these colleges, where America’s elite are trained, a very biased view of India emanates, and can undermine the ‘India brand’ built by I.T. and automotive component cos.

For instance, when the New Jersey legislature was trying to restrict BPO contracts with Indian companies, white lawmakers argued that doing deals with India strengthened an oppressive and alien culture! (Incidentally the law was passed).

American scholars have claimed that Hindu mothers do not form loving bonds with their children the way western mothers do! University of Chicago Prof. Wendy Doniger, in the Philadelphia Inquirer, called the Bhagavad Gita, ‘a dishonest book’ that ‘justifies war’. Prof. David Gordon White’s book, Kiss of the Yogini: Tantric Sex in its South Asian Context, in which he remarks that the bindi a Hindu woman wear represents a drop of menstrual blood. Perhaps, due to Yoga’s increasing popularity there is an attempt to disassociate Yoga from Sanatan Dharam. The American Yoga Association states: “There is a common misconception that Yoga is rooted in Hinduism; on the contrary, Hinduism’s religious structures evolved much later and incorporated some of the practices of Yoga”.

Some of the reasons for these false views of India are poor training and standards in studying and translating from Indian languages, lack of basic fact-checking, and the exclusive use of highly questionable methods like Freudian psychoanalysis to “explain” Hindu deities, religious figures and even Hindu women.

The widely respected doyenne of India studies, Prof. Kapila Vatsyayan, notes by unquestioningly privileging Freudian analyses, the richness and complexity of Indian culture, myth and symbol is reduced to “a single-minded pursuit of reading myth and symbol at particular level i.e. sexual … there is a sense of bewilderment when one notes that rather outdated and almost passe theories of the psycho-analytical are being applied, when the discipline has taken in many more penetrative paths.”

Swami Vivekananda, Ananda Coomaraswamy and Sri Aurobindo encountered similarly demonized representations of Indian culture in their own times, and engaged in a vigorous intellectual debate to correct these excesses. Perhaps not surprisingly, Swami Vivekananda and Sri Ramakrishna Paramahamsa are now especially targeted by elements in the American academy for revalidating and reinterpreting Hindu religious truths in the light of their times.

Thus, by applying Freudian psychological techniques in an untrained, amateurish fashion, highly questionable translations of original Bengali texts and by inventing “facts”, American scholars have passed damning “judgment” on these iconic Hindu figures. It has been claimed that Sri Ramakrishna was a conflicted homosexual, and that his mystical states and religious visions were bogus- the result of his psychological maladjustment.

Swami Tyagananda of the Ramakrishna Mission, and independently, Prof. Somnath Bhattacharyya, a noted psychologist, produced detailed refutations of these claims- proving both fabrication and incompetence. But the exposed scholars were able to wiggle out of it by claiming essentially a) their critics were “Hindu radicals” b) that Indians were sexually insecure and their arguments should be psychoanalyzed further! Foolish attempts to ban books rather than debunk them also helped these ‘scholars’.

These and other findings are reported in a new book, Invading the Sacred, written by a team of international scholars. It highlights troubling issues that every Indian should pay attention to.

Why does this book concern Resident Indians? Given the neglect of rigorous academic documentation of our history and culture, there is an almost blanket use of foreign textbooks, academic material and research in teaching, learning and authentically defining Indian history and culture. The views of European Indologists or American Sanskrit scholars loom massively as “truth” in the psyche of the student, teacher and intelligentsia.

While this book is in the first instance about reclaiming the space for unbiased and non-defamatory academic research and study of Indian culture in the U.S. academia, its import goes well beyond that. No nation can surrender sovereignty over the authentic documentation of its culture -or of its problems and solutions- to others. It is not only a matter of academic debate, or of traumatized Indian-American children and adults; it is also a strategic imperative in the projection of soft power as the Indian nation rises to its rightful place at the world’s high table.

We are a US tax-exempt non-profit private foundation. Our Internal Revenue Service Tax Id Number is 22-3339826

Order Our Books in India